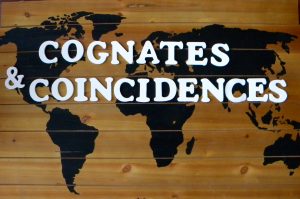 Languages share a tremendous amount of words. French, Spanish, and English practically share 30-40% of vocabulary, which some people (like my husband) use to their advantage by altering their accents to mimic that of French while actually speaking English. To my surprise, my husband’s strategy is actually quite effective whenever we vacation in France or Quebec in Canada. It may just be that the French-speakers exposed to his Franglais actually understand him in English. Nonetheless, he definitely sounds French from far away 🙂

Some words are true cognates, like the word AMI or AMIGO, both of which mean FRIEND and relate to English through the  word AMICABLE which is another word for “friendly”. But FRIEND also relates to the German and Dutch FREUND and VRIEND, so in a kind of 6-degrees-of-Kevin-Bacon, everything is related.

On the other hand, some words are related by sheer coincidence and might share spelling but mean two completely different things. For example the word COMMENT in English is an opinion while in French “comment” means “how” as in “how are you” so it’s clearly not an interchangeable word.