Do’s and Don’ts of language teaching at home! 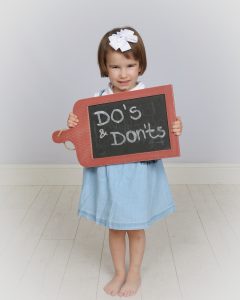 This list will be rather one-sided…. Most of the time, you should DO a lot: mainly DO SPEAK, READ and SING in another language. The DON’T list is short: DON’T CORRECT and DON’T GIVE UP!

1. DO SPEAK – even when it seems like your baby or toddler doesn’t understand you or doesn’t listen to you, you should keep speaking. It can be a very challenging task because one language might be weaker than another, making it tempting to communicate in the dominant language, however the less you speak to your child in one language, the weaker that language becomes, eventually fading out almost entirely. So SPEAK to your child as much as you can.

2. DO READ – reading allows your child to hear words; words they know, words they don’t know yet, words they understand, and words that they don’t understand yet. There is no better way to introduce new words than through reading. Reading books on many different topics introduces more vocabulary. Usually this will teach your child new vocabulary that you don’t usually use in your day-to-day language. In the case of boys, for example, there are a lot of books on construction trucks, equipment, and other construction and building-materials topics. In my experience, I never talked much about excavators or cranes or forklifts when making breakfast or doing bath time, but that’s what kids love to learn about! But it usually takes a book to use vocabulary like “koparka” “dźwig” and “wywrotka” because I would otherwise probably never talk about diggers, cranes, or dump trucks.

3. DO SING – if you have every listened to another language, you will know that often the experience of listening to somebody speak in a foreign language sound like one continuous flow of words. To an inexperienced ear, language sounds like the words melt together. People – and kids – have a hard time distinguishing when a word stops and another one begins. This is where singing plays a very important role. Singing naturally breaks up the sounds and through the melody allows a child to repeat the words, even if they don’t yet understand them! Think about a song that breaks down a word like “DESPACITO” for example. If you’ve ever heard the song, chances are you’ll know exactly how to say it by now. And it’s probably playing in your head right now over and over again. The song has now given the word added value! It is so much more than ink on paper. It has a melody! It is fun to say. This is what you do for your kids when you sing in another language. You break down the language and make the words more accessible and easy to remember.

DON’T CORRECT – when your child is learning more than one language they will mix words between the two languages. It is all related to the way that they learn the languages, where they don’t detect the fact that they know 2 separate languages; the languages that they know form one language, everything just has 2 meanings. For more on this concept, please read my blog on “How do kids learn to be bilingual” https://multimammoth.com/2017/10/03/how-do-kids-learn-to-be-bilingual/ Correcting which words go with which language is not necessary. It makes it so confusing. Remember that the child knows exactly what they are saying; to them it makes perfect sense to say “I have a hole in my spodnie”.

A parent pointing out that “spodnie” should be “pants” in that sentence will confuse your child because chances are that he already knows that “spodnie” means “pants” but in this instance chose to use the word “spodnie”. It will also discourage them from speaking and using the languages that they know to communicate and get their point across. This process of mixing languages doesn’t last forever. They eventually learn how to separate the languages, so while it’s happening enjoy the polyglot in your house!

The last DON’T relates to simply keeping it up despite the challenge. Don’t give up on SPEAKING, READING, and SINGING to your child even through they will answer to you in their dominant language. Don’t give up on reading even when your child resists reading in another language because they say they don’t understand it. Don’t force it, but give incentives like “I’ll read two in English and one in French”. Children will accept the structure that you impose on having more than one language in the house. It that means that every night you read one book in French and two in English, that’s how it’s going to be. Stay confident that you’re doing the right thing. The benefits of bilingualism are tremendous. Languages spark children’s interest in literacy, create a window into another culture, and open the door to a closer relationship with extended family or friends in another country. Keep at it because like me, you have probably never met an adult that says “my parents spoke only English to me at home even though they knew Italian and I’m so glad I never learned it”. Any adult whose parents could have learned another language when they were young always regrets not having learned it, even just a little bit. So DON’T give up! Your child will be very grateful later on in life.