Think of LANGUAGE as a toy; let go of the stress! 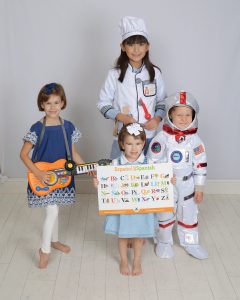 So many people say that they wish that they could teach their children another language. The second part of that statement is almost always: “but I don’t speak anything other than English.” Understandably, it is very difficult to teach anyone a second language if you speak only one, however, that does not mean that parents can’t introduce the concept of languages to their children at a very early age. The idea of introducing languages that you don’t know to your children is similar to buying your child a toy guitar: it doesn’t mean that you have to be a professional guitar player in order for your child to be introduced to playing an instrument. Furthermore, you don’t – and shouldn’t –  have expectations that your child will start playing the guitar like a professional if all they do is have a toy guitar laying around their toy chest. But the point is that languages aren’t much different than toy guitars. Just like learning how to play an instrument, learning to speak another language is a long process that takes years of practice and learning. It takes multiple inputs (i.e. speaking, reading, listening, seeing, and most importantly the need to communicate) in order to learn a language, however you child should be encouraged to explore languages just the same as they should be encouraged to try more than one food. Let kids explore languages just so that they know that they exist! One of the Multi Mammoth™ bilingual alphabet placemats isn’t going to make your child fluent in another language; the intent is simply to spark their interest in languages. Rather than picking just one language, get 7 placemats and use a different one every day of the week. Let your kids write all over the alphabet (with a washable marker so you can use the mat over and over). Talk about the funny additions to some of the letters like the little cloud over the Ñ or the tail on the Ç. The alphabet placemats show kids the similarities and the differences between an alphabet that they are familiar with already (the English) and another alphabet that is new to them. Through the use of cognates, the languages become more accessible, more relevant, more familiar. With just one extra letter a, the word “rat” in English becomes “rata” in Spanish. Kids can learn that “flower” in Spanish is spelled almost like “floor” but with one “o” missing, i.e. “flor”. How about “jaguar”, which is spelled the same, but sounds so different. Kids can find these similarities and differences between the two languages fascinating. It sparks their interest in languages and lays the foundation for them to continue learning later on, just like playing with a toy guitar can spark their interest in learning how to play for real or lead them to other instruments. The toy guitar is just a small part of the learning process about music; just like languages are a small part of learning about the world and communication in general.

So to the parent who feels like languages just aren’t for them, I say let your kids explore them from the beginning. Kids are allowed to put on a astronaut costume or a chef’s hat and pretend like they know what they’re doing! Making languages equally accessible and part of the inventory of possible activities to try throughout the day should be a basic part of their childhood! Letting them play with languages (even if they don’t succeed at speaking them!) will at the very least make it less intimidating for your kids to pick up a language in the future when they start learning languages in school.